EIGHT BIGGEST REASONS WHY TO PYTHON?

Programming Languages exists for more than decades but by the course of time new updates, new launches make them more advanced and more compatible with the programmers. A trend of C, C++, JAVA still exists and has their influence too but programmers are now giving high value to Python.
Also, we can say Python is winning the hearts of developers and programmers. Python considers being the most popular language among all the existing programming languages.

Reasons to Fell in Love with Python

Here are the infatuated reasons to fell in love with Python:
Scripting and Automation in Python
Computer Graphics by Python
Used in Big Data
Used in Data Science
Used in Artificial Intelligence
Web Development and Testing by Python
Portable and Extensible
Simple and Easy to Learn
High Popularity
High Salary 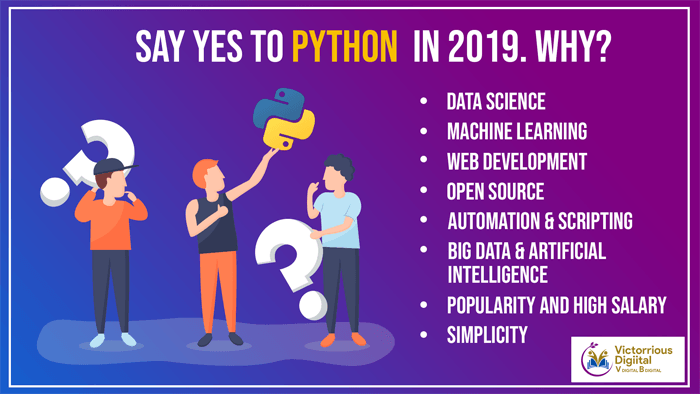 Why Learn Python in 2019?
Python becoming the most popular in use including these biggest reasons below you’ll find and seek to learn this now:

DATA SCIENCE: Data Science is one of the biggest reasons among the top 10. Python is the foremost language of 2019. Previously for data science, programmers were using MATLAB for scientific research but years later after the advancement of language and technology Python came into existence with numerical engines like “NumPy” and “Pandas”, “PyMySQL”, “PyBrain” etc. which are the big reasons in itself. Another big reason is the diversity because it allows one to do perform various things like You can create your own scripts to automate stuff, do web development, and many more.

MACHINE LEARNING: Machine Learning came a couple of years ago and rapidly got changed in these years as we are witnessing it. It has made rapid changes until 2018. Algorithms are changing and they being so sophisticated. A great example lands with the world’s largest search engine that is Google whose algorithms can answer to your query as per your expectations. If you are also interested and want a pet project to start with then you get Python as the major programming language which makes it easy.
No doubt JAVA too has a library for machine learning but for both Machine Learning and Data Science Python is the first language that came in the mouth of every developer or programmer.

WEB DEVELOPMENT: Python has an arrangement and has an inventory of libraries and the frameworks to develop websites. Django, Flask, Pylons are the kinds of frameworks Python offers. The core part is that these frameworks are written in Python so it makes it easy, a lot faster, and stable.
Python is so genuine for beginners that they can start their leanings with the best Python Classes in Pune or the area nearby them to start a career for developers and programmer designation.

OPEN SOURCE: Python is the open-source for providing diverse libraries and frameworks. It provides you with the multiple modules you want to work with. Python benefits one with business logic and makes the work easier.
Django and Flask are popular for web development. Python got the best compilations of both machine learning and data science they are as follows: Tensor Flow, Scikit-Learn, Keras, Pandas, and many more. NumPy and SciPy are also popular for data science.

AUTOMATION & SCRIPTING: Most of people knows that Python is a programming language but it is also a scripting language. The time consumption for writing code is less which is just the highlight of this language when it comes to writing the scripts, tools, and automated stuff. Python is a great help desk with automation and simultaneously in scripting when the code gets written and checked then it can be used for several many more times. So, it’s easy in the time of automation to task in a program.

BIG DATA & ARTIFICIAL INTELLIGENCE: Python is advance in handling multi hassles of data and supports parallelism which means one can use Hadoop as well.
Python got one library called Pydoop and where you can write a MapReduce program. Python widely uses for Big Data.
Similarly, Artificial Intelligence (AI) is enormous progress and development in the tech world. Successfully helpful in developing the mimic of the human being to think, to analyze, and to act like humans in terms of taking decisions as well.
Python already has explored the career of techies and tech across the world.

Professionals and Python Engineers earn the highest salary in the techie world. The salary in the U.S.A for a Python Developer is around $116,028 per year.
Average salary from $70,000 USD to $150,000 USD depending upon the experience you attain.
It already built the pace for various job opportunities and is expected to rise in the coming years.
Freshers thinking to build a career in developer so must join the best Python classes in Pune or the area or institutes suits them. Get the certification and apply for a well-designated position in an organization.

SIMPLICITY: Like Python is famous for big data science, machine learning, and even for artificial intelligence it is also famous for the simplicity it possesses. Beginners with no basics of C, C++, or JAVA can begin with the simple coding and learning of Python.
Python is readable, simple with the English language type syntax and no hard rules. All you have to install Python and you’re done with an easy setup. Here you will not face the problem for class paths like in JAVA or C++.

CONCLUSION:
“Python may not make you polyglot but yes it will provide you with the advanced programming tools for various purposes as mentioned above. Grow rich with the programming skills to uplift a career with a great experience with Python from the best Python classes in Pune or the places you are nearby.
Python providing a direction to the pace to grow one with the richest skills of the programming world.”

What to do next with Python?