Python: The Next Level of Programming Language

Like humans, computers also have their languages but which language is the best in use and has a future scope to communicate with programs to deliver the best results to the user and making the user-friendly platform for the growth of both developer and his services plus the growth of an organization? Here is the big question that arises and puts most of the developers and software engineers in dilemma.
After long research and experiments on multiple languages, computer languages conclusion got little stabled on the languages like .NET, JAVA, PHP, PYTHON, HTML5 has a good and futuristic scope to work with to build multiple useful applications and to use it in various source codes. Till 2018, Python also gave rise to gain its knowledge in various institutes with a proper certification program in every best Python class in Pune.

Python mired and bound with diverse qualities helping in data science and data technology. It has been successful in analyzing a large number of data sets. Also, it is giving its helping hand in web development, application development, system administration, developing games, and numerous software applications. With the advancement of technology already it is expected to grow and enrich to benefit both the developer and a user.
Countries like India, U.S.A, and other hunting for professionals good at Python to enrich their organizations and to serve the people to their best simultaneously.

Know the 6 Big Reasons why Python is on-demand There are 6 main reasons in the background became the answer to why Python is so popular?
Highly Productive
From the time Python came into existence, it has explored a lot. And playing with Python was so handy to developers as it has English-like commands to read and write. Till now already it has increased the productivity 5 to 10 times over JAVA and is foreseen in the future to be helpful in increasing the rate of productivity at high speed.
Simple Syntax
Python program is read by the parser.
Python is used for making a smooth platform at both the end for developers and users. It uses simple syntax just like our English language to read and write. When it comes to the comparison of this language with other ones then you’ll find Python codes are the shorter in the topic of string, control flow, inheritance, file i/o etc.
Example of Python Syntax that can be executed directly by writing a command line:

Also, you can create a python file on the server using that is by the help of .py file extension and you are ready to run it on the command line:

Uncomplicated Code-Readability
Guido van Rossum once said, “Code is read much more often than it is written.”
As the code once is written correctly will never going to write again but that code may in the future be used again for that one need to properly get and able to read that code and also, able to understand it.
Reviews of most Python programmers and users are in favor of the high readability trait which is also known as the heart of this language. Python language is dynamically typed, and no declaration is required.
Free and Open Source
Python itself is developed under OSI approval an open-source license means it is easily available to anyone for any purpose. Python is made in a way that it can be interactive and attractive for a programmer to code and a user to use.
Easy to Implement
Most LINUX/UNIX users use Python as it is easy to install and easy to make in use. Python programs are portable can be run from any platform without any change. Most of the computer systems are now coming with installed python in it because of the easy feature of the implementation of the Python language.
Easy to Learn (Even for Beginners)
In reality, if you belong to the non-technical background then it may go difficult for you to get to the track of coding without having a base or basic knowledge about coding. No worries, Python is here with the gift to provide the best learning and knowledge of coding in easy and simple ways. You can start with Python and go to complex coding if needed.

Career in Python ahead

In the world of the 21st century with inventions and evolution of technologies, Python seems to never cease rather it will get updated with the course of time as well as will grow dynamically. As the software field with advanced programmers is busy to make the easier life of the user by making the platform simpler. According to IEEE Python tops the list in the list of the popular programming language in 2018.
More than 41 big organizations already have adopted this language. It has made a promise to many developers for application development and simultaneously giving birth to multiple job opportunities for both freshers and professionals.
Python professionals are the 3rd best paid in the country $110,021 per year.

Many IT organizations are calling out for professionals who have skills and are experts in both advanced and core Python languages.
Python programmers have an extensive career ahead if we look ahead in various areas. Distinguish fields are here in which a Python programmer can build their resume and make a professional identity by the  python classes in Pune:
Python Developer, Software Engineer, Software Developer, Senior Software Engineer, Data Scientist, Robotic Engineer, and many more.
If you too are interested in building a career ahead in the field of programming then can join and make yourself excel in python by joining the best Python classes in Pune.

WEBSITES, COMPANIES, AND ORGANIZATIONS THAT USE AND DEVELOPED BY USING PYTHON 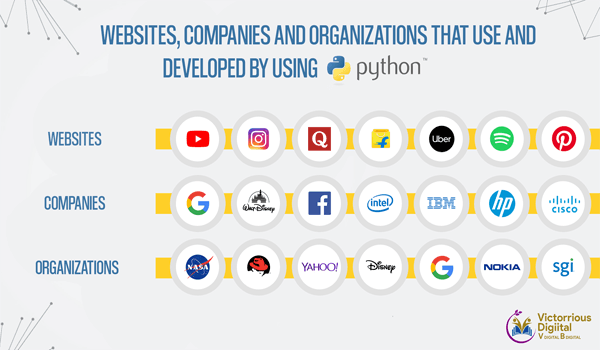 Also, there are some branded companies and search engines that use Python in the back-end coding to give a better experience to their users that are mentioned in the following list:
Google, Yahoo, Walt Disney, YouTube, Facebook, Intel, IBM, Cisco, Dropbox, Hewlett Packard, etc.
Not only this there are several organizations that use Python for the best outcomes.

If you are also willing to learn and grab the knowledge of the computer’s demanding language that is Python then you can be one of the finest and the top programmers in the world of coders and programming. Join the best Python Classes in Pune and get command over the popular language Python. Python classes in Pune will make you learn and understand the computer’s language with the help of practical knowledge and real-time learning to get some professional skill and experience to outperform in an organization.

What to do next with Python?